I have been trying to figure out a “Slam-bang” opening for this story, but it is eluding me. I can only say I was amazed and enthralled by what I saw, Sunday afternoon, at Encore Theatre in Lima. Amil Tellers of Dramatics, Inc., the organization which operates Encore, presented “Spamalot”, a musical loosely based on, and lovingly ripped off from the Monty Python movie “Monty Python and the Holy Grail.” The Broadway smash adaptation, with story and lyric by Eric Idle and music by John DuPrez, ran for 1500 performances in its 2005 debut and was credited with 14 Tony nominations.

Since the whole “Python” thing took place as I was in my young adult years, I was captured by the insane vent of this troupe of comedic actors. Their stories often had little plot but terrific substance. It took a similar kind of craziness to appreciate their humor. I must have seen “Holy Grail” fifty times or more, and have, for years found myself using quotes from this classic in my own life, much to the chagrin of those who had no clue what the difference between a European swallow and an African swallow was and seldom had no interest. I had never seen the stage play, so I was very excited to attend the recent auditions. I had no intention of trying out, but I was anxious to see what kind of talent this huge show would draw. I was not disappointed. The first evening, persons I knew and respected were in attendance, and already knew some of the dialogue and music. These were obviously devotees.

So it was with much anticipation that I ventured into the cold yesterday to see this production and its familiar story-line and music. I was never, for a moment, under-whelmed. The play begins with a narrator (Historian), Bill Hanz, giving the audience a brief history lesson and pointing out the country in which this takes place, England. Of course, a whole production number immediately follows, which features singers and dancers from “Finland”. Finally, the Historian, must return and in a stern tone stop the proceedings by hissing that he had said “England”, not “Finland”. The number immediately deflates, and the story is off.

Spamalot is the story of the ardent, but dense King of the Britains, Arthur, who has his own quest to search the realm for the best men, knights, whom he can recruit to join him in Camelot at his roundtable. Along the way, his quest must change, as various roadblocks are placed before him. In the end, he must perform all kinds of tasks, including collecting “Shrubbery”, and finding the Holy Grail in order to bring his reign to fruition. Drew Kantonen, who seems to be able to portray everything from romantics to baddies, to nobility, has the privilege of molding himself as the put-upon King for whom nothing ever seems to go right. Kantonen is, at once, bewildered, frustrated, commanding, and yet insightful. It is more of a straight-man role, often overshadowed by the fruitcakes by whom he is surrounded. Kantonen is unapologetic and always holds his own.

The most jarring of the “fruitcakes” is Patsy, Arthur’s “Batman”, who is loyal to his boss, even as his services seem to be undervalued. Anthony Taylor, a local boy, who has come back to the area to become the choral director at Shawnee H.S. is every-ounce-for-every-second the quintessential Patsy. There was never a moment, that I could tell (And I was watching!) when Taylor was not “into” his role. He gave the character everything he had, even leaving us with some terrific ad-libs which may or may not have been in the script. His facial expressions were priceless. 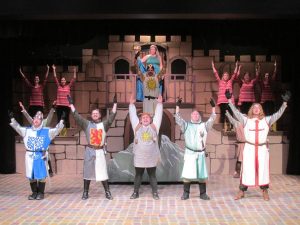 There were so many great performances in this performance, I cannot document them all. but a few mentions are necessary. The Knights of the round table were, as a group, spectacular. So much talent was thrust upon us that we could scarcely take it all in. First, the dancing, done by men, some of whom did not have a great deal of experience in this area, was more than serviceable. But what struck this observer, was the moments when this group was asked to sing harmony. Their efforts were spot-on; delightful to hear.

As Lancelot, Nick Hyber was fun to watch. As usual, he gets to play a flamboyant and colorful character. He hit all the high notes, both acting, and singing and was a professional in every respect. Always love his accents.

Hilarious as the Marxist Sir Galahad, was CJ Brincefield, a young man who has “grown up” at Encore and now fills almost any needed part with confidence and ease. He also did a marvelous turn as “Herbert’s father”. We awaited every entrance by this talented young man and were always thrilled when it happened.

Chris Butturff, Encore staple, and star was cute in everything he did and had some nice takes. He was particularly funny as Mrs. Galahad, beard and all. He also had several other roles, Belvedere, and Concorde, which were funny bits.

Brave, brave, Sir Robin, for years, has been one of my favorite parts. Mark Hilan, who recently starred in “Laughter on the 23rd Floor”, was just the chicken the playwrights ordered. His unwillingness to fight was manifestly evident. The audience took to him immediately. But my favorite role for Hilan was the tower guard, who had no respect nor care for Arthur and his “quest”. I loved the scene and Hilan’s timing. I expected hilarity and I got it.

An unfortunate item. The Lady of the Lake, is a person who is essential to every part of the story. She passes off the famous sword to Arthur, she sets him on an enhanced quest, and in the end, has a huge part in the final chapter with the King. An actress with a fantastic voice, Debbie Briggs was chosen for this important role. I am acquainted with Ms. Briggs and feel she understands her huge singing ability but under-appreciates her acting chops. And she has them. Oh boy, does she have them. Briggs has contracted pneumonia (Did I spell that right?) and cannot sing her part as she normally would. What a supreme disappointment for the young lady, and for her anticipating audience. But she persevered and gave the acting, and some of the singing her very best. In a smart move, director Missy Keller had choreographer Karin Dorsey sing Briggs’ solos back-stage. Debbie lip-synced like a pro and the show went forward. It was a unique situation, handled professionally. Dorsey, who, by the way, did a terrific job with the choreography, was a perfect substitute for Briggs. A brave solution which worked out well for each. I can hope that, by next weekend, this ingénue will have her voice returned to her, thrilling those who will attend, then.

There are so many fantastic things I could mention but have not time. I do want to say that the “lesser” characters were every bit as professional as the “stars” The dancers, Jessica Liska, Alexandra Newby, Stephanie Moran, Victoria Recker, and Amanda Beining were electric. they could really sing, too! They were always “on”. Two other male actors, Tristan Wannemacher, and Josh Adcock, added many characters, making each one their own. Adcock was particularly comical as Herbert, the son who needed to be rescued. This actor is always on top of whatever part he is given.

This review has gone on long enough. But not quite. It would be a crime if I did not admit my admiration for the work of the Costume designer, Vickie Beining and her crew, Linda Craft, Karen Finn, Stephanie Emerick, and Diane Finn. I estimated that over 100 costumes would have been needed for this huge production. Perhaps I am short-changing them at that. But the costumes were fun, funny, and unobtrusive when necessary, yet they stood out for me as a major success of the show. I would not want this kind of assignment. I had visited the theatre during rehearsals, finding the lobby full-to-overflowing with costumes and costumers. A major “thumbs up” to these ladies and to Props gatherer, Chris O’Neill. A difficult undertaking, well done!

If you did not see this fantastic and hilarious show this past weekend, you must immediately rush to Encore Theatre to get your tickets for one of the three performances (January 19, 20 & 21, 2018)  still scheduled for this coming weekend, Friday, Saturday and Sunday. I hope you can, as I did, enjoy this crazy story, and all the talented crazies who make it happen.