On Saturday, January 6th, Columbus, Ohio was invaded and, now, all hail the king of Avatar Country! And, it’s about damn time, because we’ve always yearned to be ruled by Swedish heavy metal band, Avatar!

We have witnessed Avatar’s eye-popping carnival of madness during a number of festivals over the last couple of years. It’s never been enough. The limitations of set times have always left us wanting more. So, color us downright giddy when we learned that Avatar has struck out on a  2017-18 headlining tour supporting their latest CD, Avatar County. The unique Avatar Country World Tour features sideshow performers from the Hellzapoppin’ Circus Revue, the rockabilly band, The Brains and, finally, an extended set from Avatar in all their dramatic, regal, grandeur. 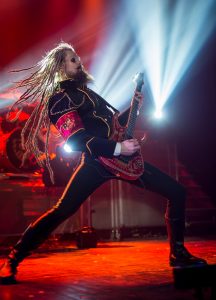 We caught the Columbus tour stop at Express LIVE. Apparently, the show had originally been set at the Newport, but a change in venue was necessary because the Newport could not accommodate the horde of fans converging together in Avatar Country.

Avatar Country, Avatar’s seventh studio album, was released on January 12th. And, while the release was still days away, we were treated to the thematic majesty of the band’s fabricated realm. Tapestries, proclamations, new music and a guitar king, complete with a crown, have been added to Avatar’s already theatrical stage show. And, while such pageantry may seem gimmicky, the pomp never upstages the band’s incredible talent. 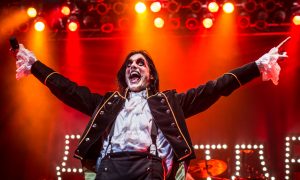 During this particular tour, fans are treated to music from Avatar’s early years, some crowd favorites such as “Hail the Apocalypse” and “Smells Like a Freakshow” and tunes from brand-spankin’ new, Avatar County.

Every song on Avatar Country and, we do mean EVERY, has the word “king” somewhere in the title. So, listeners might anticipate a repetitious, generic collection of songs. Nope. The CD is an eclectic genre-mixing celebration of Avatar’s music and mythical kingdom. The metal guitar work in the opening song, “Legend of the King” is incredible. And, with a switch, listeners are treated to an upbeat country-metal mix in “The King Welcomes You to Avatar Country.” Then, listeners are right back into the head-banging classic Avatar fair in “King’s Harvest.” The lyrics throughout the CD follow the regal theme and the music is enthusiastic and inventive while maintaining Avatar’s distinctive pounding sound.

Come one, come all to Avatar Country and do NOT miss this tour!