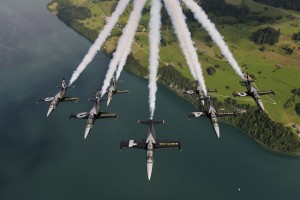 Last appearing at Dayton in 2011, the Army Golden Knights inspire audiences of all ages with their patriotism and exciting maneuvers. Formed in 1959, the Golden Knights are the Army’s official demonstration team. Members are drawn from US Army paratroopers who have demonstrated excellence in parachuting skills. They will thrill spectators with their intricate canopy work along with skydiving formations and landings that require extreme precision. Based in Ft. Bragg, North Carolina, these Ambassadors of the Army represent the skill and professionalism of U.S. soldiers serving all over the world. The t2 member team will travel to Dayton in their Fokker C-31A Troopship which will also serve as their jump aircraft.

What 1929 airplane can now fly vertically? The Jack Link’s Beef Jerky “Screamin’ Sasquatch” Jet Waco can and will thrill audiences for the first time in Dayton in 2015. A recreation of the popular Jet Waco attraction developed by Jimmy Franklin and Les Shockley in 1969, Sasquatch is a highly modified 1929 Taperwing Waco powered by its conventional Pratt & Whitney 985 Radial Engine. The excitement comes from a modern day General Electric Jet Engine cleverly tucked underneath producing an additional 3,000 pounds of thrust that will allow it to fly vertically. These dual power-plants provide over 4,500 lbs. of thrust, a loud distinctive roar and an amazing performance. Flown by US Unlimited Aerobatics Champion pilot Jeff Boerboon, the Screamin’ Sasquatch is one wild, untamed airplane that spectators are sure to enjoy.

Millions of people have witnessed the hard-charging and highly-entertaining aerobatic maneuvers of air show legend, Sean D. Tucker. Spectators at the 2015 Vectren Dayton Air Show will be treated to a spectacular performance as Sean puts his Oracle Challenger bi-plane, a fire-breathing monster with over 400 horsepower, through a rigorous aerobatic routine. Dedicated to excellence, Sean practices three times daily with over 10,000 lifetime practices. Bestowed with a 2007 Living Legend in Aviation Award and a 2008 National Aviation Hall of Fame Enshrinee, Sean sets the standard of aerobatic superiority with the passion and perfection he brings to every show.

Back by popular demand is the World Famous Shockwave Jet Truck. Powered by three afterburning Pratt Whitney J34 jet engines producing 36,000 HP, Shockwave is the Guinness Book world record holder for the fastest jet truck in the world at 376 MPH. Spectators will be amazed as it explodes to life and hurdles down the runway at lightning speeds…even racing an airplane! With the three ingredients loved most by air show fans…fire, speed and noise, it is an absolute show stopper and the Vectren Dayton Air Show is proud to present this incredible attraction in 2015.

Matt Younkin’s Twin Beech 18 demonstration will make its debut appearance at Dayton. The Beech 18, designed as an 11 passenger transport aircraft, was never meant for aerobatic flight but that never has stopped the Younkin family. Matt’s performance is almost a mirror image of the one his father Bobby pioneered and flew for over 15 years to show off the capability of this grand aircraft. The performance begins with a roll on takeoff followed by a series of Cuban eights, point-rolls, and even a loop, maneuvers never conceived possible for a large transport plane. The size and loud noise of the Pratt Whitney radials together with an awesome smoke display will thrill show spectators.

As if that isn’t enough excitement, the show has been selected by the U.S. Navy for a F/A-18 Hornet Demonstration, a highly popular major show attraction. The Hornet is the Navy’s premier strike fighter and will thrill spectators with its awesome power and agility.

The Boeing F/A-18 Hornet is a supersonic, all-weather carrier based aircraft designed as both a fighter and attack aircraft. Powered by two General Electric turbofan after-burning engines, the Hornet has a top speed of Mach 1.8 (1,190 mph). It carries a wide variety of bombs and missiles supplemented by a M-61 Vulcan cannon. The F-18 and has been used extensively by the U.S. in combat beginning with the bombing of Libya and later in the Gulf, Iraq and Afghanistan wars. Hosted by GE Aviation, the U.S. Navy East Coast F-18 Hornet Tactical Demonstration Team will come to Dayton from Strike Fighter Squadron VFA 106, “The Gladiators,” based at Naval Air Station Oceana in Virginia.

“We are absolutely thrilled the Navy has selected Dayton for a F-18 demo,” stated Michael Emoff, Chairman of the United States Air & Trade Show Board of Trustees, the governing organization of the show. “What an awesome show we have for 2015. We can’t wait for summer to get here,” he added.

All tickets for the Vectren Dayton Air Show Presented by Kroger are on sale now. The popular Chairman’s Club, Pavilion, Family 4 Pack, and Blue Sky Chalet tickets offer a range of seating amenities. Tickets can conveniently be purchased through the show website at www.DaytonAirShow.com.

Unstoppable Rock on the Range 2015