Trapt just wrapped their most recent multi-state tour. The band ended the tour riding the wave from last year’s record release of DNA. Trapt, live in concert, was a can’t miss show for rock fans. The band was polished, the technical and meticulous approach to their sound was mastered perfectly at Columbus’s own Basement.

Fans from all over the state and beyond showed up and packed the pit. The band played some of their long loved hits and favorites from their newest album DNA. “Headstrong” was brought to the fans in a fresh style with a kickass instrumental solo. Front man Chris Brown sang directly to his fans and was stoked to sing along with the excited crowd. Chris was energetic and on point for the packed show. He sang to the fans with the emotion that Trapt’s iconic lyrics demanded. Chris entertained his fans by speaking to them in between each song. 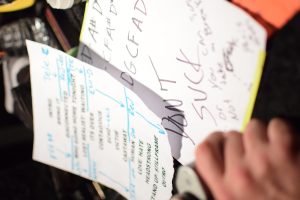 Guys grabbed their girls and rocked to songs like “Victim” because, everyone can relate to a “Love Hate Relationship”. The showstopper was “Castaway”. The song Preformed live was given a certain depth that has to be experienced. Chris’s voice was crisp and malonic. The drumming, guitar, and voice seem to melt together at points creating one even tone only to erupt in rich guitar rifts. The live guitar effects, pedal work and backing vocals brought by Ty Furry was exactly why rock fans flock to Their shows. Ty stayed mysterious with his black hoodie draped over his head like a rock reaper. Drummer Brendan Hengle was energetic and never missed a beat. His style was light and fluid. He could beat steady then give a gentle tap on the cymbals like little droplets of water. Bass Player Pete Charell keep true to himself by playing a light but moody tone. He played to the crowd with an even sound, not too much, not too little. He never missed a beat and was a mad man onstage. The show was brought to a close by a deep and intimate performance with Chris standing on a lonely stage strumming an acoustic jam for his fans. 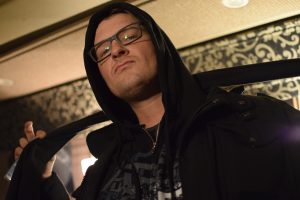 Pazz Magazine had a chance to speak to Ty Furry and he said ‘Trapt Fans are the greatest’. He talked about the current tour and the amount of dedication that each member has to the band and their fans. He wanted us to know how much work goes on behind stage to make each show the best. He said preforming live is where it’s at for him. He laughed as he recalled a time when the tour bus blew a tire and he had to jump on the lug wrench, loosening the lugs to change the tire, to get them to the show on time. Then he brandished a busted acoustic guitar and spoke about some crazy ways the guys pass the time while not onstage. The guitar tech Jim grabbed the mangled guitar and said “look if you hold it together like this it’s in tune”. It’s this “nothing is impossible” attitude they all have on tour that make each show possible. Ty spoke about all the small mishaps that endanger each show. Like having to MacGyver stage equipment and remembering to keep their stage passes on to fend off aggressive security personal. But no matter what, each night when the lights drop, the guys appear onstage, intact, and ready to rock.