Doors Open at 10am on June 23rd, 2012 at the Jackson County Fairgrounds in Jackson, MI!

The advance price of tickets for this year’s ROCKAPALOOZA is $30, while day of show tickets cost $35. All children under the age of 10 are admitted free, and the event is ALL AGES. This year, Jam Heads Party Deck passes are just $100 and include half off discounts on beer and food, free Monster Energy Drink, a meet and greet with Puddle of Mudd, Rehab, and Sore Eyes, and features a shaded area with seating. For regular attendees, Budweiser is offering $1 drafts from 10am-12pm. Doors open at 10am.

The festival will also host a free pre-party concert on Friday, June 22nd at the fairgrounds featuring headliners Trapt and openers Sore Eyes. The free concert is also ALL AGES and doors open at 6pm.

Bands that have performed at ROCKAPALOOZA in the past include Sevendust, Crossfade, OTEP, Mushroomhead, Silverstein, Smile Empty Soul, and more. Past hosting and appearance duties have gone to Pauly Shore, Big Black and Bam
Bam of MTV’s Rob & Big, and Big Cat from MTV’s Fantasy Factory. Last year, over 8,000 people attended the festival.

You can purchase tickets online now at www.etix.com! 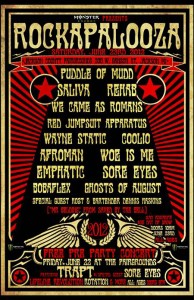 “Thanks but no thanks”