For the second consecutive year, music festival Rock on the Range 2014 (ROTR), began the festivities SOLD OUT. The three day festival held at Columbus Crew Stadium in Columbus, Ohio hosted over 105,000 concert goers hailing from around the country and the globe. Making rock history again this year, ROTR hosted over 50 bands blazing three stages with non-stop genre melding rock music for over 12 hours each of the three days. The event was brutal, in a good way! 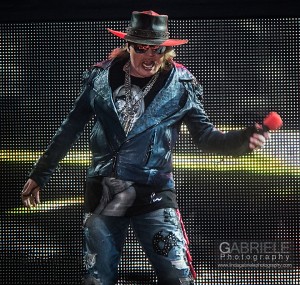 The first day was capped off by headlining performances by Staind and Guns N Roses. While many in the crowd were curious to see if Axl Rose would live up to the negative hype that inappropriately precedes his current performances, any fears or concerns were waylaid when the lights dropped minutes EARLIER than the band’s scheduled performance and Guns N Roses exploded into an amazing and lengthy set. The current incarnation of Guns N Roses includes masterful performers DJ Ashba, Bubblefoot, Dizzy Reed, Tommy Stinson, Chris Pitman, Richard Fortus and Frank Ferrer.

The headliners for Day Two did NOT disappoint. Slayer nailed it playing an insanely long and intense set to an exhausted and appreciative crowd. Avenged Sevenfold capped off the night with their special brand of mayhem and monster hits.

The finale for the weekend included amazing performances by fan favorite Five Finger Death Punch and Kid Rock. A number of exhausted concert goers left the venue prior to Kid Rock’s performance hoping to get a jump on the traffic and assuming they were missing a “country-fied” Kid Rock performance. Well, they were sadly in error and missed a surprisingly FAB performance by Kid Rock and company that included rousing renditions of his classic hits. The Devil Without a Cause was all business!

Picking overall favorites from the event is difficult every year and this year was no exception. Every performance was strong and well-suited for the event. Rather than favorites, we can only share some observations. For example, on Day One a particular stand out was One Ok Rock. This Japanese band blew us away. And, while they have been around since 2005 and have a legion of fans already, the band’s exposure at ROTR can only help them skyrocket further.

On Day One it was great to see rock veterans Living Colour burn up the stage. Day Two brought the legendary Suicidal Tendencies frontman Mike Murr’s manic energy that has clearly not waned one bit since he founded the band in 1981.

Day Two also included an incredible performance by The Pretty Reckless. Not only is Taylor Momsen an enthralling performer, she’s a damn skippy vocalist as well.

Finally, the theme on Day Three just seemed like FUN. We love that ROTR doesn’t take itself too seriously and includes comedians and hilariously talented performers such as Steel Panther (2013 and 2013). This year the comedy fun included Jim Florentine doing double duty in the comedy tent and introducing bands. And, Jim Breuer doing triple duty in the comedy tent, introducing bands and performing with his Jim Breuer Band.

Once again Rock on the Range has made rock history as one of, if not THE, best music festival in the country. New and old friends converge each May in Columbus, Ohio for a party like no other.

The Dayton Air Show Welcomes Back the Blue Angels