WAYNE STATIC was the enigmatic former frontman and namesake of Static-X, who later forged a successful solo career. Wayne was scheduled to co-headline tours with Powerman 5000 and Drowning Pool over the next several months. Wayne was a strong musical influence for local musicians and many fans in the area were looking forward to his scheduled return to Fort Wayne at Piere’s on November 9th on the aforementioned co-headlining tour. He will be greatly missed.

The most recent statement regarding Wayne’s death was a personal note issued by his surviving wife on social media sites on November 3rd, 2014:

“I would like to thank everyone on behalf of all the Wayne’s family and myself for all the kind words from all of Wayne’s friends and fans and other bands. Wayne went very peacefully in his sleep and probably didn’t even know that it happened. (Which makes me feel better that he wasn’t in pain. )It will be sometime before we know why it happened but I will keep everyone informed. He had so much more to give the world. As his wife, biggest fan, and worshipper, i will keep him alive and finish everything that I can that he has been working on. He will never die and I want to share everything that I can that he has to give to his fans and friends. I will try my hardest to be strong and make him proud.”
-Tera Wray Static 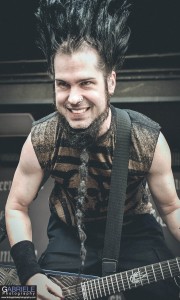 Mushroomhead's "The Righteous & The Butterfly"