With heavy hearts, we say goodbye to Chester Charles Bennington.

Bennington was an American singer and songwriter best known as the frontman for the rock band Linkin Park. He was also the lead singer for Dead by Sunrise and fronted Stone Temple Pilots from 2013 to 2015.

Bennington first gained prominence as a vocalist following the release of Linkin Park’s debut album, Hybrid Theory, in 2000, which became a commercial success. The album was certified Diamond by the Recording Industry Association of America in 2005, making it the best-selling debut album of the decade, as well as one of the few albums to ever hit that many sales. Linkin Park’s following studio albums, Meteora (2003), Minutes to Midnight(2007), A Thousand Suns (2010), Living Things (2012), The Hunting Party (2014), and One More Light (2017) continued the band’s success. Bennington formed his own band, Dead by Sunrise, as a side project in 2005. The band’s debut album, Out of Ashes, was released on October 13, 2009. He worked on new material with Stone Temple Pilots in 2013 to release the EP High Rise on October 8, 2013 via their own record label, Play Pen. Bennington has been ranked in the Top 100 Heavy Metal Vocalists by Hit Parader (No. 46).

Bennington died of an apparent suicide by hanging at his home in Palos Verdes Estates, California. An employee discovered his body around 9 a.m. PDT on July 20, 2017. Bandmate Mike Shinoda confirmed his death on Twitter, writing “Shocked and heartbroken, but it’s true. An official statement will come out as soon as we have one.”

While the details of Chester’s passing are newsworthy, we prefer to remember and focus on his amazing musical legacy.

Linkin Park was scheduled to continue touring later this month behind 2017’s One More Light, which had produced the top 40 hit “Heavy,” the latest in a long, long line of popular singles for the band. Prior to a line of One More Light World Tour dates (which were set to begin July 27), Linkin Park played what was to be its last concert with Bennington on July 6 at the Barclaycard Arena in Birmingham, England.

The below video was published on YouTube earlier today.

Many of the photos Chester had posted on his social media pages included photos of him interacting with fans. Chester’s final Twitter profile photo was captioned, “me and my peeps.” 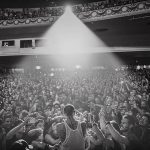