Wednesday night, November 8th at the Royal Oak theater in Detroit, I had the pleasure of attending the Arch Enemy tour! With Trivium, While She Sleeps and Fit for an Autopsy, it was a killer line up and made for one hell of a hump day (night)! I, unfortunately, arrived late and was sad to miss Fit for an Autopsy. So I got warmed up with While She Sleeps and was impressed! This was my first introduction and the impression I got will not be forgotten. These English fellows tore it up with super high energy and supporting their 3rd release, You Are We, they delivered a performance that blew me away. Look out for these guys because I have a feeling they are hungry and on a mission to rise to the top.

Next up was Trivium. I’ve seen Trivium on numerous occasions and they always perform at a standard they set years ago. Matt Heafy and the gang are supporting their 8th release, The Sin and the Sentence which was released October 20th of this year. Opening up with the title track and playing a nice mix of their catalogue, Trivium masterfully works the crowd into a frenzy and took no prisoners along the way! They played for almost an hour with songs like “Betrayer”, “Until the World Goes Cold” and the current single, “Heart From Your Hate”. These guys are metal veterans and work hard to achieve the respect they rightfully deserve. I am positive Trivium is here to stay and love touring, so make sure you check them out! 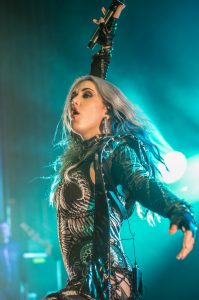 Then next up, the reason I drove two and a half hours, the mighty Arch Enemy! Formed in the mid-nineties from Sweden, they are touring the world supporting their 10th album, Will To Power. With Guitar gods Michael Amott and Jeff Loomis, Daniel Erlandson on drums, Sharlee D’Anglo on bass and the beautiful Alissa White-Gluz as the bad ass front-man or rather front-woman, they destroyed all of us mere mortals! Opening with “The World Is Yours” and performing numerous tracks from the new album like Blood In the Water, The Race and my favorite, The Eagle Flies Alone, they delivered a brutal set. The melodic guitars and driving rhythms mixed with an energetic and nothing short of awesome vocals prove that these masters of metal are some of the best musicians in the world! This was the first time I saw them without Angela and in my opinion, they added a little more range vocally but at the same time, kept it brutal. I love this band and encourage everyone to see them live because the energy they create cannot be captured in the studio. Make sure you pick up Will To Power and definitely catch them on tour if you get the opportunity for you will not be disappointed! Until next time, keep them horns high and I will see you in the pit! 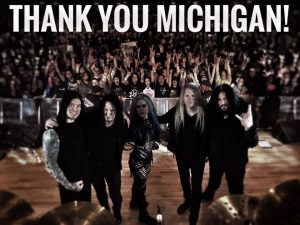 The Best of Muddy Waters Reissue